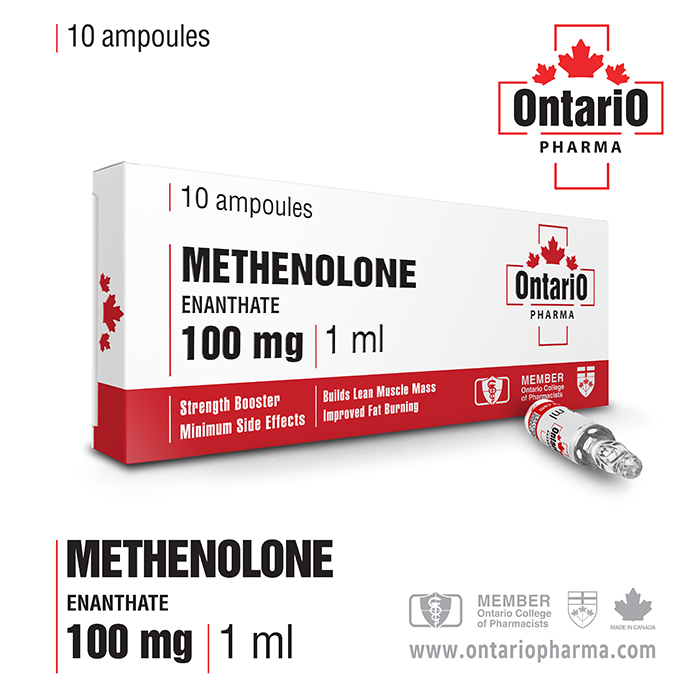 Methenolone Enanthate also known as Primabol is a steroid that is characterized by a moderate anabolic and mild slow-released androgenic effect. The product is widely used in strength sports to achieve quality muscle growth (in steroid cycles for weight gain or during lean courses). Methenolone Enanthate is problably the safest steroid for increasing muscle mass and strength. It is also one of the safest anabolics. Methenolone Enanthate by OntarioPharma works very effectively when taken correctly, both to increase muscle mass and to clean and reduce fat. It is an anabolic steroid with a very effective action and is the only steroid with which you will be able to gain muscle mass even with a low-calorie diet. Methenolone Enanthate has the property to bind strongly to anabolic receptors. It is also the only steroid with which you can gain solid muscle mass with minimal to no side effects: no acne, no increased aggression, no water retention and swelling, no loss of sexual desire, and no strong suppression of your own testosterone, as in other anabolic steroids. In parts, Primobol has an effect and action similar to dihydrotestosterone, the hormone from which it is derived. One of these effects is the inability of the compound to bind to the enzyme aromatase, due to which the preparation cannot aromatize (cannot convert to estrogen), even when taken in high doses. Because of this property, Methenolone is used clinically as a drug that helps reduce breast tumors.

Side effects of Metenolone enanthate include symptoms of masculinization like acne, increased hair growth, voice changes, and increased sexual desire. Methenolone Enanthate is not often used on average women due to difficulties in controlling the hormone in the blood plasma.

Recommended dose of Methenolone Enanthate is 300 mg per week for beginners, 300-500 mg for intermediate users. Dose can be increased up to 500 - 800 mg per week. Women take the dose in the range of 50 - 100 mg per week, without side effects and contact virilization. The dose of Methenolone Enanthate injection can be taken once a week, but if you decide to take larger amounts of it, it is better to divide the weekly dose into two doses – we suggest them to be on Monday and another one on Thursday.