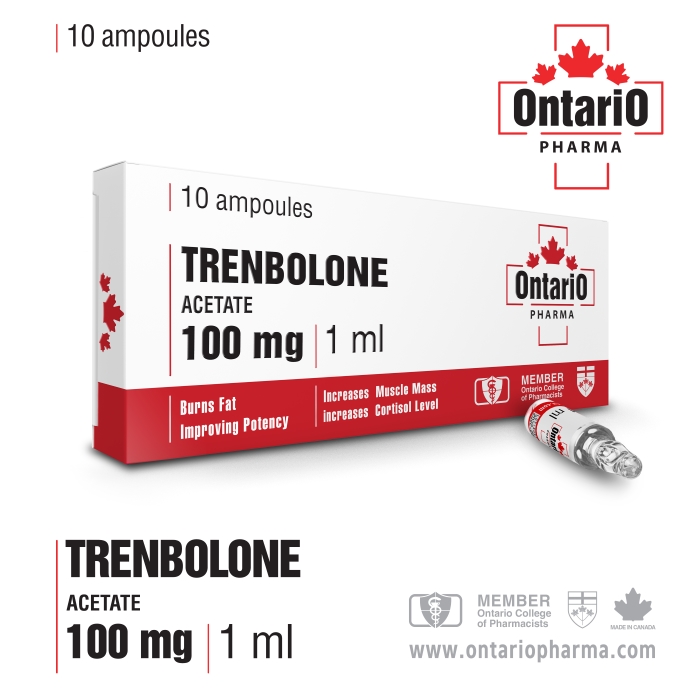 Trenbolone acetate is an injectable (generally) anabolic steroid derived from nandrolone. Its activity is detached from its structural parent to such extent that direct comparisons between the two are difficult. Trenbolone is a non-estrogenic steroid and is considerably more anabolic and androgenic than nandrolone on a milligram for milligram basis. In appearance, it is much more commonly compared to a stronger androgen such as drostanolone, than it is to nandrolone. It is also estimated to display about three times more androgenic potency than testosterone, making it one of the strongest, commercially manufactured, injectable anabolic steroids ever. Among athletes, this steroid is highly valued for its ability to increase muscle hardness, definition, and raw strength, without unwanted water retention and fat mass gains. It is considered a drug of choice for contest bodybuilders, yet it remains very popular with recreational users who are simply looking to refine their physiques. Trenbolone is a modified form of nandrolone. It differs by the introduction of double bonds at carbons 9 and 11, which inhibit aromatization (9-ene), increases androgen binding affinity, and slow its metabolism. The resulting steroid is significantly more potent as both an anabolic and an androgen than its nandrolone base. Trenbolone acetate contains trenbolone modified with the addition of carboxylic acid ester (acetic acid) at the 17-beta hydroxyl group, so that the free steroid is released more slowly from the area of injection.

This steroid displays significant binding affinity for the progesterone receptor (slightly stronger than progesterone itself). The side effects associated with progesterone are similar to these of estrogen, including negative feedback inhibition of testosterone production and enhanced rate of fat storage. Although classified as an anabolic steroid, trenbolone is quite androgenic. Androgenic side effects are still common with this substance, and may include bouts of oily skin, acne, and body/facial hair growth. Anabolic/androgenic steroids may also aggravate male-pattern hair loss.

An effective dosage for physique or performance-enhancing purposes generally falls in the range of 100-300 mg per week, taken for 6 to 8 weeks. Due to the short-acting nature of acetate esters, the total week’s dosage is subdivided into 2-3 smaller applications.